Land Office In The News

As focus turns to Jeffrey Epstein's ranch, official says: "There is a story to be told in New Mexico"

All spent nuclear fuel in the U.S. will soon end up in one place 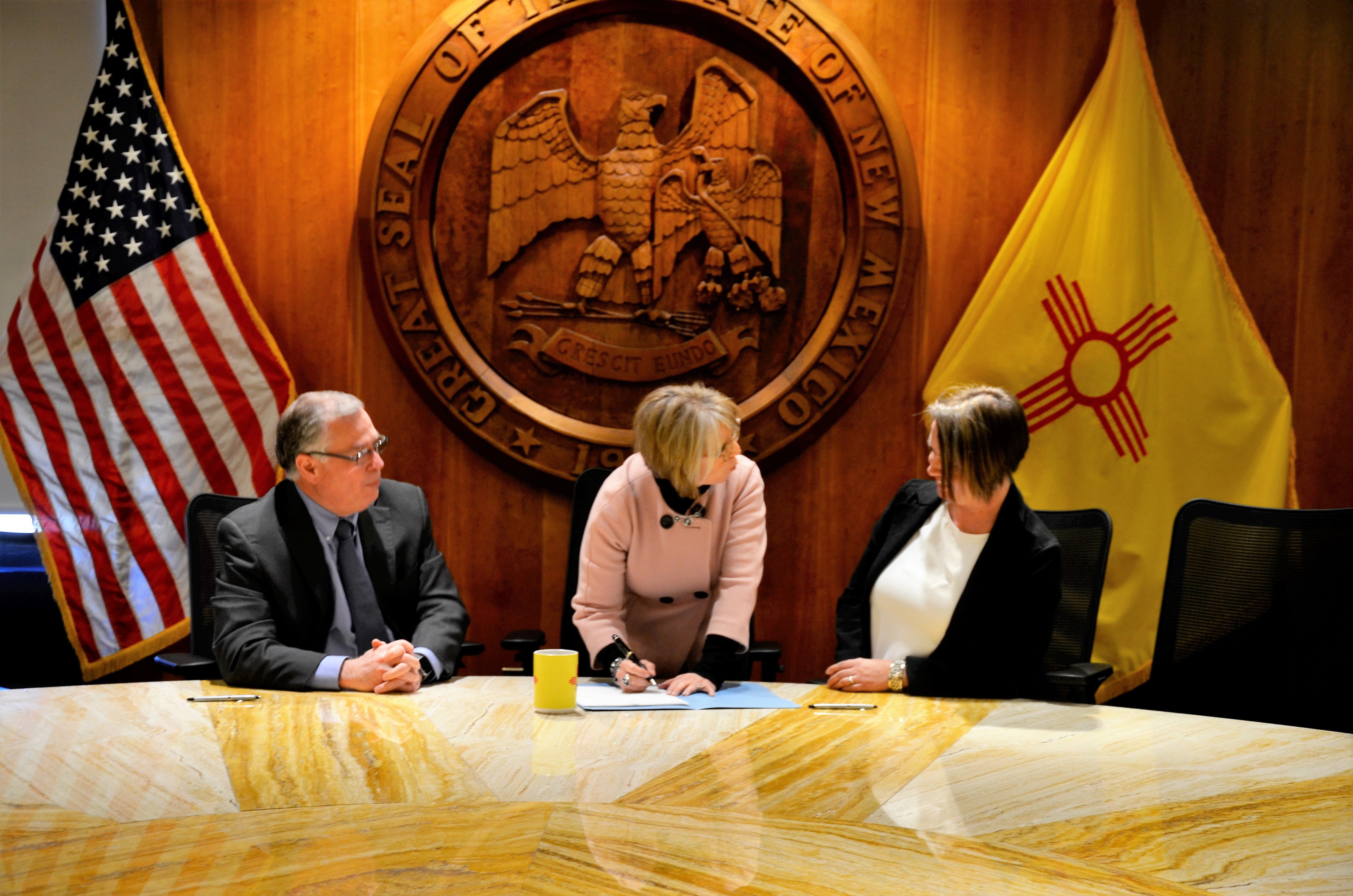 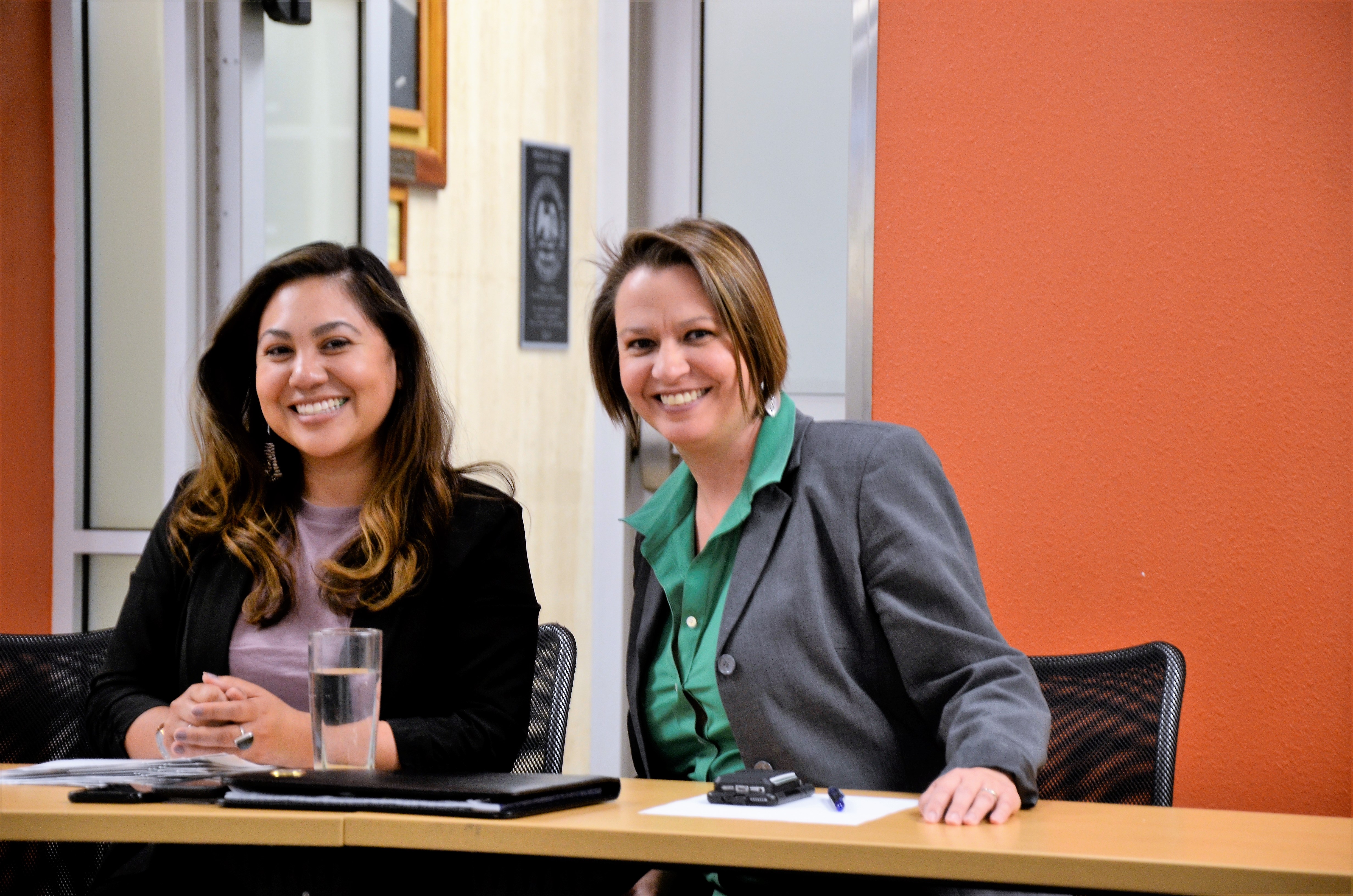 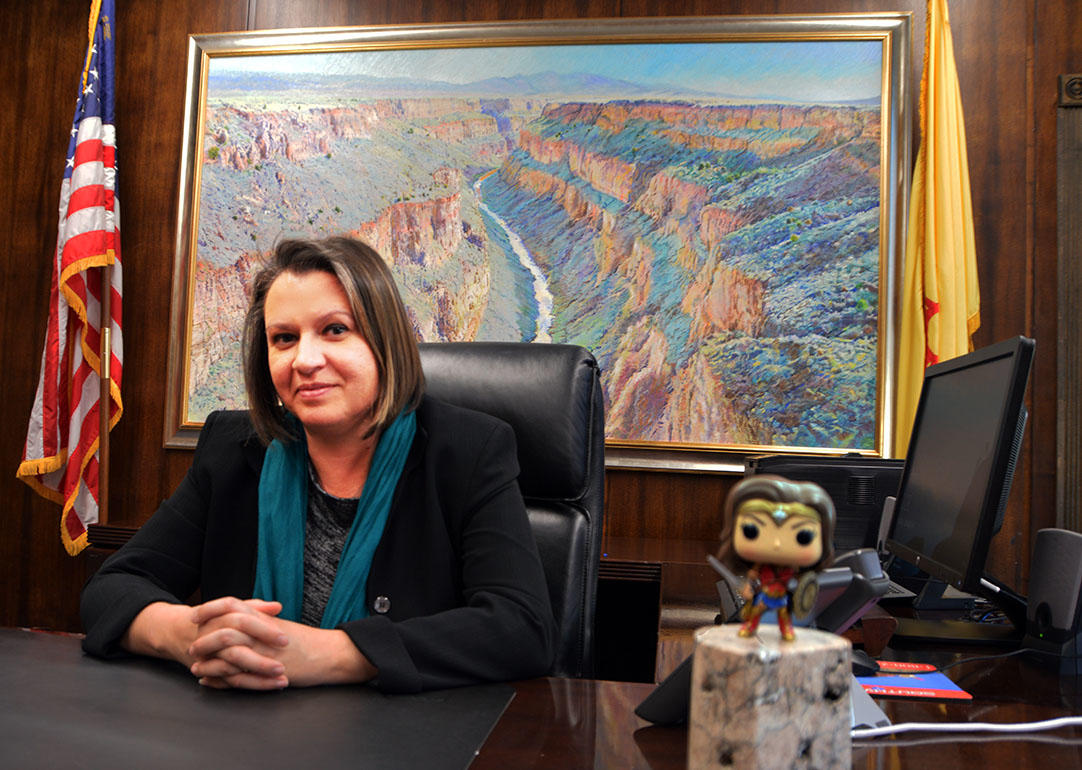 Sitting in her expansive office Friday afternoon in downtown Santa Fe, SGR discussed the hard-fought race she won against former land commissioner Patrick Lyons as well as Libertarian Michael Lucero. Her win is perhaps the biggest upset of the 2018 midterm elections in New Mexico and she makes history as the state’s first woman to hold that office.

The land commissioner is an elected constitutional officer in the executive branch in charge of managing all state lands and mineral rights, as well as overseeing leases and royalties on state land in New Mexico.

“I am so honored and grateful to the voters for selecting me to serve in this capacity,” she said. “One of the short-sided aspects of the office in the past was the unyielding commitment to making more money at the cost of our land and water. As land commissioner, I will lead and run this office with the values that we hold dear, and that is that land is precious, complex and requires a real plan. I intend to leverage the mandate of this office to restore transparency and increase funding for our schools, hospitals and colleges.”

SGR spoke about the first few minutes of her first day on the job during which she was presented with a Tom Daschle hunting cap by one person followed by a law suit from another person.

“It’s the nature of the office,” she said.

Prior to land commissioner, SGR served three terms in the state legislature where she took on many challenges, issues and constituency groups that are mirrored at the state land office.

“As chair of the House Education Committee, I successfully fought to get raises for teachers and increase funding for our classrooms. As land commissioner, I will do the same and make sure we make more money for New Mexico through renewables and oil and gas,” she said.

“Aubrey has been great … he gave me access to his staff, tours of this building and provided me with an overview of matters important to this office,” she said.

Her initial priorities are what she campaigned on … being a leader of renewable energy on state land resources and “to make sure we’re getting every last dime off our revenues for our students,” she said. “And ensuring that decision making in the land office is transparent and inclusive and offers opportunities for citizens to be involved.”

“I want to establish committees for oil and gas, agriculture, conservation and renewable energy,” she said. “Some have to be done through the legislature and others by rule making here at the land office.”

The law mandates that the state land office support the education of New Mexico children, hospitals and colleges through revenue generated from more than 13 million acres of state trust land, more than any other state in the nation.

SGR explained that being a lifelong educator and her experience gained in the legislature are of significant benefit to her new role as land commissioner.

“I was really able to cut my teeth on a wide variety of issues, constituency groups and budget demands that prepared me for this job,” she said. “The way our newly elected state auditor Brian Colon puts it – ‘Voters put an educator in the office that funds education.’”

SGR served as curriculum coordinator for the Pojoaque Valley School District until resigning the week of Nov. 8, following her election to the land office. She now oversees 165 employees.

“I’m grateful for the warm welcome and support I have received from the staff,” she said. “And I’m excited and honored to serve the citizens of this state.”

Born in Tucumcari and raised in Silver City, SGR’s father, a WWII veteran was a teacher; her mother was active in their church and community. She graduated from Barnard College at Columbia University in New York and became a teacher. Having worked abroad and around the country, she returned to New Mexico with her husband to raise their family.

SGR now resides in White Rock with her husband Eric Vasquez, the executive director of the Regional Coalition of LANL Communities and their daughters, Nica, 21, and Elia, 17, who she describes as very excited about their mother being the first women land commissioner in New Mexico.

Secretary of State Maggie Toulouse Oliver, right, with Land Commissioner SGR in the lobby of the land office Friday in Santa Fe. The Secretary of State stopped by to visit SGR and welcome her in her new position. 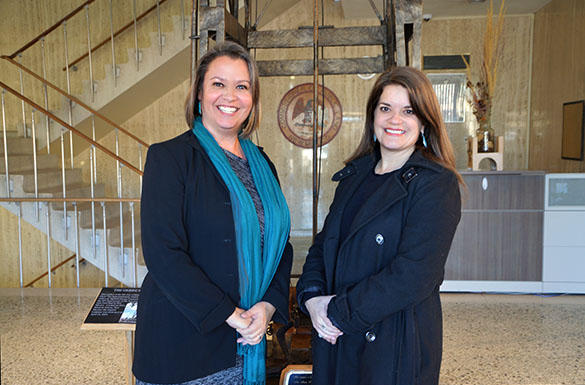 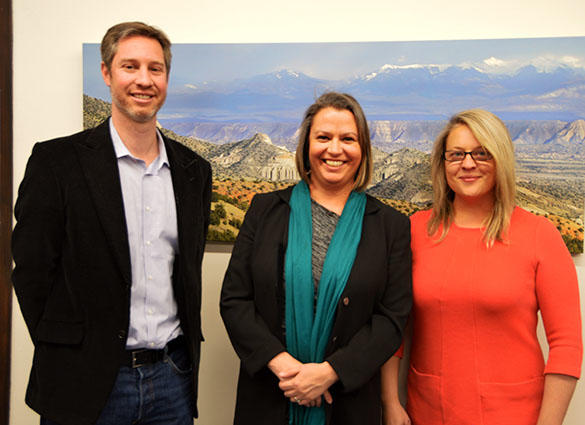 Commissioner SGR, left, speaks with Executive Director Mary Beth Maassen of the United Way  of Northern New Mexico Friday in the Murray E. Morgan Room, named after the land commissioner who served 1957 to 1960, at the land office. 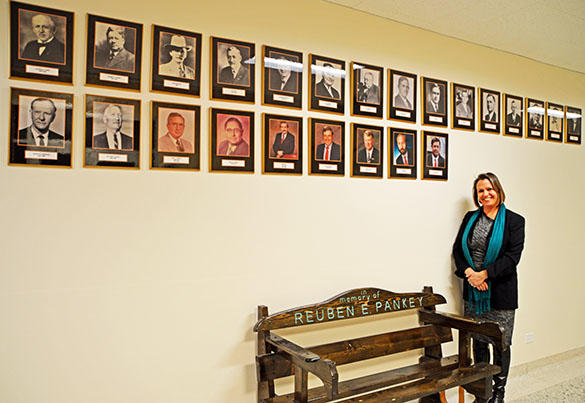 Commissioner SGR standing by the wall of photos depicting her 24 predecessors at the land office. 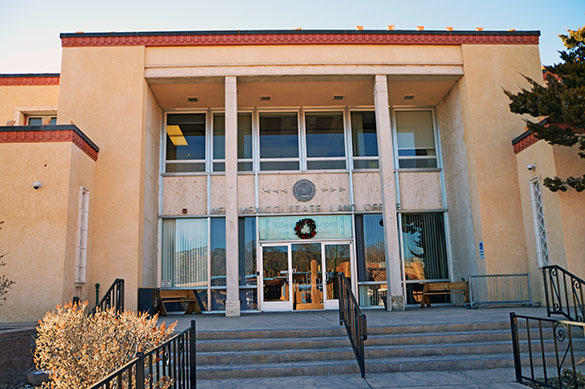 See their story and video regarding RMEF and NMSLO’s efforts to improve sportsman access to 12,000 acres in the White Peak vicinity. 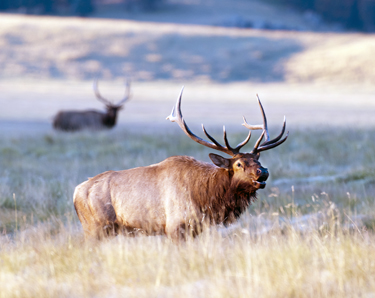 The podcast was produced in conjunction with KSWV Radio in Santa Fe. 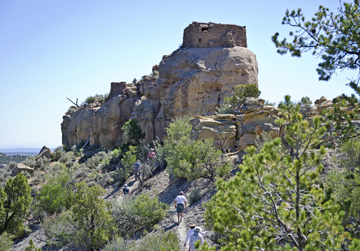